A Defining Moment in Life… 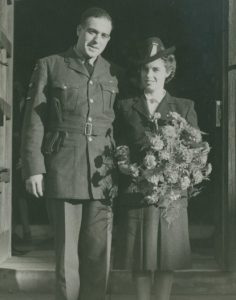 My father, Charles Lemon, was born in Ontario, Canada, along with nine other siblings, and raised on the Lemon farm.  His lineage was French and Scottish.  During World War II he and his brother Gordon joined the Royal Canadian Air Force and fought in the Pacific and Atlantic theaters, and his brother John enlisted in the Canadian Army as a military policeman.

Geraldine Swan, my mother, was born in England of Irish decent.  In fact, we can trace her ancestry back to Edward Swan (c. 1689), who married the daughter of the Lord Mayor of Dublin, and whose father was the Sheriff of Dublin. My mother was a college-educated physiotherapist who cared for wounded military and civilians during the World War II London bombings.

My parents met and married in England at the end of WWII, then moved to Toronto, Canada. My dad graduated as a mining engineer from the University of Toronto. Dad was the first and only Lemon at that time to have graduated from college. During his college years he worked part-time as a lumberjack and miner, and my mother as a physical therapist. They were poor at the time and claimed boiled cabbage as their staple. But it wasn’t all work and no play. They did find time for some recreation: since they gave birth to my sister Judy and me. 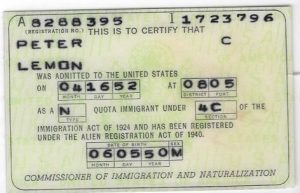 In 1952, shortly after my dad graduated, he found a job as a mining engineer in the United States. My dad, mom, sister and I were issued green cards to enter and work in America. I was a 23-month-old green-card-carrying immigrant. I still have the green card today. My younger brother Rick would be born in the United States three years later.

We packed up and moved to America, to a small village called Alabaster, in the state of Michigan, one hour north of Bay City, located on the shores of Lake Huron.  The mining town, quarry and plant were owned by the United States Gypsum Company.  They mined gypsum ore and used a tramway over the lake to load the rock onto ships going to world ports.  The open pit quarry has been in operation since 1862 and still thrives today.  These were the days when men were men: the days of muscle and sweat. Life was not easy, but after work on a Friday night the men, including my dad, would congregate at the Bear Track Inn to drink, arm wrestle, shoot pool and talk about mining, maybe women, but I wasn’t there. 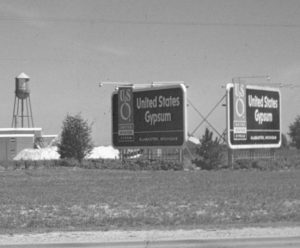 In the early years there were as many as forty company owned houses in Alabaster when the population was up over three hundred.  The houses were acquired from the lumber companies up north. When the lumber companies closed down, they shipped the houses to Alabaster on large sleds during the winter when the lake froze over. The houses were small.  They had no insulation. That’s why in the winter it was the job of the children, at least in my case, to keep snow piled up as high and thick as possible around the house, which also kept the water pipes from freezing.  Once a family moved into a house it was their responsibility to renovate it to the best of their ability. Through the years many of the houses either burned down or rotted away as people moved out of the area or to neighboring towns.

When we arrived in Alabaster, in ’52, there were only sixteen houses left and the population was down to eighty-six.  We rented our house for twenty-five dollars per month, which was taken out of my dad’s paycheck. Even though he was an engineer, his wage wasn’t much compared to today’s standards. Our family shared one bathtub, and during the winter it was not uncommon to share bath water.  We hunted, fished, quartered a beef and butchered a lamb to stock our freezer. Our garden kept us in fresh produce. 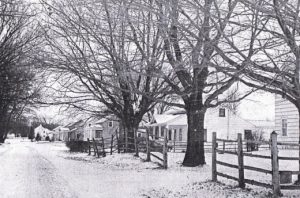 We rented our house for twenty-five dollars per month

The neighborhood had an open door policy; we never locked our doors.  The neighbors always looked out for one another.  Our landline phone system was on the same party-line. If you were curious or nosy, and craved to know what was going on with the neighbors, you would pick up the telephone receiver and quietly listen in to their conversation.  Now, I won’t say I did that, but it’s possible.

The village was patriotic. Each summer the company would have a huge plant picnic. The picnic was held outside our elementary school which was just up the road about a mile.  American flags flew. Music played. There would be pie-eating competitions, three-legged races, wheelbarrow races, and the famous hammer and nail driving contest for the women. Of course, the men drank beer: Black Label, Pabst Blue Ribbon and Stroh’s. 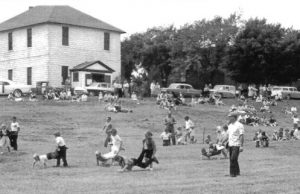 Each summer the company would have a huge plant picnic

As children we lacked nothing. Ninety feet out my front door was Lake Huron.  In the summer we would swim and dive off the raft the men had made for us.  We had a wooden boat, if that’s what you wanted to call it. It did have oars, but leaked like a sieve, so we always had to have a bailer. We also fished for lake trout, bass, perch and walleye.  In the winter Lake Huron would freeze over so we skated, played hockey and, if old enough, snuck our cars on the ice to do donuts.  We had a sandlot baseball field, basketball court and football field all rolled into one.  Out my backyard was over eight-thousand acres of company land to hunt deer, squirrel, partridge and, my favorite cuisine, raccoon. As kids we used that land for hiking excursions, playing army and building forts. 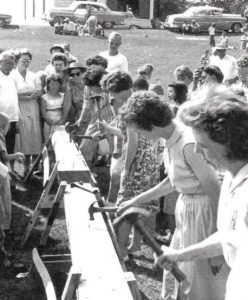 My dad was a hard worker and tried to set an example for those under his employ.  With this foundation of pride in his profession and home, he ventured into other areas of interest.  He learned to golf, started skiing, took Dale Carnegie courses and became a layman at church. More important to him, he joined the Lions Club in the neighboring town of East Tawas as a way of giving back to the community and country.

Shortly after we moved into our Alabaster home, my mother started her own physical, occupational and speech therapy business in what was supposed to be our dining room.  She had a therapy table, heat lamps, pulleys and weights, and the place smelled of ointment. Her degree hung on the wall, just above our freezer.  It was cramped quarters, but she made do. Mom was the only therapist in the area.  Patients came from miles around to get assistance and if they couldn’t come to her, she would go to them, especially if they needed to be rehabilitated after a stroke. People would call her the “Angel.”  She was also the designated nurse and doctor for our village.  I remember when a neighbor mom came running over to our house holding her small son who was choking and unable to breath.  My mom quickly assessed the situation, turned the boy upside down, gave him one big slap on the back and out popped a huge piece of pink bubble gum.   We were all wide eyed as we watched.  My mother had been a star tennis player in high school and college so she also contributed to the local community by starting a youth tennis league strictly for women that encompassed the four surrounding towns. 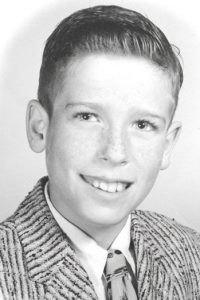 When I was eleven, in 1961, nine years after moving to America, I remember my dad and mom studying and reciting the history of the United States in our living room including the Constitution and the Bill of Rights.  They sang America’s national anthem and “God Bless America.”  On many occasions they discussed what it would be like to be an American.

Then, one day, my mother put on her finest dress, my father his only suit, my sister her best and me a gray sports coat with a tie that had soldiers on it.  We were very excited. The four of us jumped in the car and headed to the Iosco County Court House.  We entered a courtroom, stood tall and proud before a judge, each raising our right hand as we took the Oath of Allegiance to the United States of America.  We were sworn in as citizens of the greatest nation in the world, with all the rights, privileges and responsibilities that are derived from being a naturalized citizen. My parents had earned their citizenship. This was a defining moment in life.

It’s significant to note here, that by 1990, the entire mining town of Alabaster had been demolished by the United States Gypsum Company.  It was a sign of the times. Taken over by weeds and grasslands, the village is gone; but not the memories. Let’s continue…