…it’s the fall of ’92.  I’m up. I stride towards the batter’s box. I kick my cleats in a couple of times to get planted for the first pitch.  Swinging the bat to loosen up, I zero in on the pitcher.  As he begins his windup, I cock my left heel and jack up my bat. The pitch in on its way… I feel a tap on my shoulder.  Ginger, the committee chair for Cub Scout Pack 366, breaks my concentration. “How would you like to be Cubmaster for Pack 366?”

We, all the Cub Scouts and their family members, were sitting in the bleachers watching the Colorado Springs Sky Sox baseball game.  At that time the Sky Sox were the Triple-A affiliate for the Colorado Rockies. I was there to support my son Luke, who was a Wolf scout and in the second grade.

“Well, Pete, what do you think? You want to be Cubmaster for Pack 366?” Ginger smiled. I was caught off guard… I thought I was at bat. I tried quickly to process the question.  I reflected back to my Cub Scout days in Alabaster…did she know the mischief I caused? What effect might this position have on my son? I really enjoyed kids…heck, I was just a big kid at heart anyway. Okay, I would consider the position, Ginger.  “Good, come to the next committee meeting to be introduced to the outgoing Cubmaster and meet all the committee members and den leaders.”

My first meeting was quite the experience.  The Cubmaster who was leaving was dry, grumpy and didn’t seem to enjoy being a leader.  I wondered what type of influence he was having on the boys, since leaders always set the example either directly or indirectly. It was a large pack, but the numbers were dwindling. I could see Ginger, as the committee chair, had her hands full.  All I did was observe and take mental notes.  I became the pack leader overnight and I knew the environment would change dramatically.

Ginger and I met numerous times, brainstorming how we would reorganize and improve Pack 366.  I believe the creativity of those meetings should be credited to the homemade chocolate cookies she always had in her cookie jar or fresh on the sheet.  The recipe came out of one of her two published cookbooks, so they were more than just good, and always served with ice cold milk. We met often for the next three years.

Ginger was extremely organized, and now we expected the monthly meetings she headed to be the same way.  We always had an agenda in the members’ hands days before the meetings. We implemented the ‘five minute rule’ and held to it in all meetings. A committee member had no more than five minutes to communicate an idea, offer suggestions or express concerns, including discussions.  If it needed to be voted on, it must be completed in that time frame too or be tabled to the next monthly meeting or dropped.  At first members tried to fight ‘the five minute rule.’  In the beginning it was a struggle, but after a few meetings the concept ran like clockwork—literally.  The meetings lasted precisely one hour and were extremely productive.

My primary job as Cubmaster was to lead the monthly pack meeting with the scouts, deliver the content of those meetings and help present awards to the scouts. Plus I assisted in recruiting new scouts and guided pack outings. I didn’t really oversee the den leaders because they were responsible for their scouts and were excellent leaders themselves.

My philosophy was to emphasize responsibility, but had a balance of fun and excitement too. At its apex of membership we had a hundred-twenty-four scouts. Typical scout packs numbered forty. We could fill the elementary school gym with scouts, parents and family.  We had parents that really supported their sons and they also liked the entertainment.

At the beginning of each pack meeting we said the Pledge of Allegiance and the Cub Scout Promise and Law. We always had entertainment, from archery demonstrations to K-9 dog expositions.  Presentations by individual scouts and their dens were part of the program. At the end of the meeting we presented awards to scouts who had earned achievements during the month.

Sometimes the younger scouts would get bored and restless so I carried a softball.  When I tossed the softball in the air the boys could yell until it landed back in my hand. The higher the softball toss, the louder and longer the scouts screamed.  There would be times when they would compete against their parents to see what group could scream the loudest.  The noise was deafening, but it refocused the scouts.

After three years as Cubmaster, during the last months of my tenure, Fern, a friend of mine, mentioned an idea that I thought would be a great parting gift to the scouts. I would serve an ice cream sundae to celebrate the New Year.

At the end of this particular pack meeting I asked the scouts if they liked ice cream sundaes.  Of course they nodded with excitement thinking they might get a sundae to eat.  They looked around the room for ice cream.  The scouts got quiet trying to figure out what was going on.  I said, “Since we don’t have real ice cream.”  I started to take off my Cubmaster uniform and underneath was a white tee shirt that said ‘Human Sundae.’ 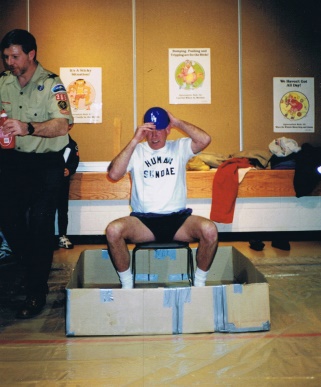 My assistants, the den leaders, brought out twenty containers each of chocolate and cherry syrup, sprinkles, cherries and whipping cream.  We had built a four by four foot sundae cup in which I sat.

Den by den, the hundred and twenty-four scouts came up and started to decorate the Human Sundae.  Their parents were laughing hysterically.  The boys were so excited they could hardly control themselves. I, on the other hand, was questioning my sensibilities and what I had gotten myself into. Who does that at forty-five years of age? 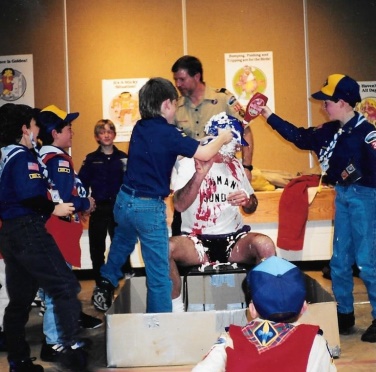 Den by den, the hundred and twenty-four scouts came up and started to decorate the “Human Sundae”

My friend Mike, who became the future pack leader and carried on the human sundae tradition, drove me home while I was in the back of my Explorer, dripping with delight.  Once home, I showered, then looked at myself in the mirror. My face, hands, arms and legs were beet red. I had not factored into the equation that the cherry syrup had actually stained my skin. It took days to wear off. 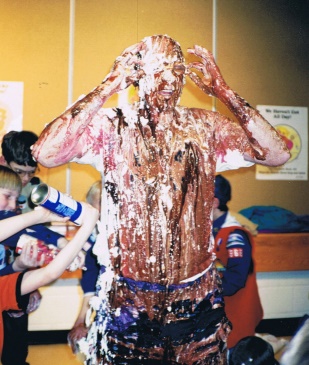 Who does that at forty-five years of age? Pete Lemon dripping with delight

As much as the scouts, den leaders and parents enjoyed Pack 366, I probably relished it more. I loved being around the scouts. We had excellent den leaders and parents. I’m indebted to Ginger for her expertise, friendship, cookies and recruiting me to be the Cubmaster. I was very grateful and blessed for the chance to serve. It was another opportunity for me to be a ‘citizen soldier’ and give back to my community.

At this juncture, I’m taking a writing intermission. Thank you for your encouragement, notes and your own shared memories. Look for me in the future.

“Thank you for reading these stories. Today, will you please forward this story on to a friend for their enjoyment too.”  – Pete

We invite you to return to this website to read more of Peter’s short stories, as they are published.  To get Peter Lemon’s short stories emailed directly to your inbox – consider subscribing using the subscribe area on this web page. Unsubscribe anytime.