Gasoline and Fish: A Stinky Combination 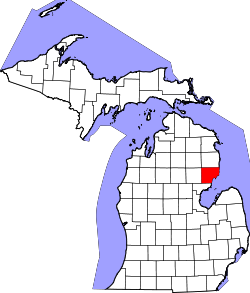 The mining town of Alabaster, Michigan, where I grew up, was located on the shores of Lake Huron.  To the south and north, starting at the outskirts of the village and continuing along the shoreline for miles, were summer retreats and cottages owned by those living in the thriving cities of Saginaw, Bay City, Flint and Detroit.

Just ten miles up the road to the north were the towns of Tawas City and East Tawas. They were only separated by a stop light and pride.  During the winter months you’d be hard pressed to see a car on their streets after nine at night, except during the Perchville Festival.  Locals and tourists would compete in ice fishing, ice motorcycle racing, and a demolition derby, or participate in the human polar bear plunge. A polar bear, of which I was one, is a somewhat intelligent human who swims in freezing water that has been created by a hole in an ice-covered lake. In this particular case, please don’t look up “somewhat intelligent” in your dictionary; you may find me.

The population then, and even now, is about four thousand combined between the two towns, but during the summer months, the city folks opened their bungalows, the parks unlocked their gates, the big yachts anchored at the city dock and the towns swelled to twenty thousand. 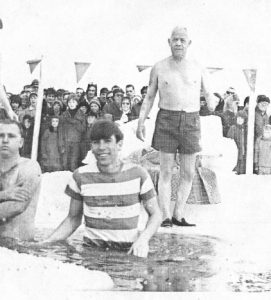 The two resort towns came alive with dances, beach parties, the sounds of power boats, the regal sight of sails on Tawas Bay, the smell of barbeque and the chatter of people laughing and kids playing.  If you lived in the state of Michigan, especially on the east side, that’s where you headed for sun and fun, whether it was for a weekend or an entire summer.

For us locals, it was an opportunity to meet people our age from the city, establish friendships and get a taste of their life. Popular were the dances at the Community Center, walking the city pier, hanging out on the sand beaches and camping or partying by the famous lighthouse at Tawas Point. That beacon directed ships north and east to Chicago.

Gone were the days of my innocence in Alabaster, the childhood adventures and mischief, Cub Scouts, camping out in the wilderness with my friends, drinking chocolate milk by way of the Schwan’s truck, company picnics and playing army.  I was on the move.

It was now junior high and high school, neither of which I was very good at because of the distractions: my home life, girls, socializing, sports, working and did I mention girls?

We had a hundred and twenty-four students in my high school class at Tawas Area High. I fit in, but not in any particular group. I was friends with the townies, miners, farmers, intellectuals and jocks. I was popular, but not as much as some. I worked. Although athletic, most high schools sports were put on the back burner by my sophomore year, but I kept on skiing and was on the ski patrol.

I remember going skiing with a few friends at a neighboring ski area.  I was on the ski lift looking down at my friend Sam skiing when he crashed on the slope. He started yelling “LEMON! LEMON!” When I got to the top, I swooshed down to him.  He wouldn’t let the ski patrol touch him without me. We put him on the ski patrol toboggan, then in the back seat of my car and transported him to the hospital where they cast him for a broken leg.

When I think of Sam it reminds me of a high school “woodsy” party we had at the Short Horn Hunting Club on the U.S. Gypsum land west of Alabaster.  Sam was still in his cast. It was the dead of winter, cold, with snow on the ground. I, and my friend Bill, had the keys to the club, which was way out in the wilderness.  There was only one way in and one way out. 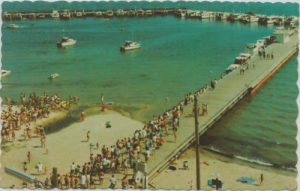 All our high school classmates were invited.  Some brought booze; we had a keg. Those outside gathered round a big fire.  Dozens of people participated; cars were everywhere.  During the height of the evening, a deputy sheriff who we all knew, because he was the youngest on the force and had gone to our high school, decided he was going to raid the party for his fun and entertainment.  Just to frighten us. Approaching the hunting club, the deputy turned off his head lights so we couldn’t see him and when he pulled right next to all of us he turned on his flashing lights and sirens, scaring the hell out of everyone.  We scattered. Many stayed in the woods for hours.  Seven would be treated at the local hospital for frost bite.  They made the local paper. 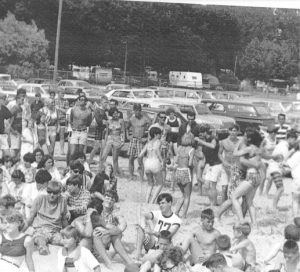 By the time I was fourteen I was hitchhiking everywhere.  I visited my friend Rhonda seven miles down the road, who I had built a relationship with starting at the age of six when I went home with her on the school bus without telling my parents. When they found me, I was in big trouble, but I couldn’t understand why, because I was just being social.

I thumbed a lift sixty miles to Bay City, to Flint to visit a friend I had met during the summer, across to the other side of the state just as an adventure, down to the Detroit Grande Ballroom for a Detroit Wheels concert, up to the Tawas’s to be part of the fun during the summer. It was also my transportation to and from work.

I worked briefly at the Midway Drive-In restaurant as a dish washer and short order cook.  Then I had another employment opportunity come my way so I took it—at the Rollins Fish Market and Gas Station. I’m trying to make this sound glamorous, but it wasn’t.  Those were the days when an employee pumped gas and washed windshields for the customer while they sat in their car.  I was that employee. When I wasn’t pumping gas I was in the back of the store cleaning and fileting fish.  The best part of the job was that I got to take home smoked fish: white fish and lake trout. I worked hard, but that was a deadly smelling combination.  Gasoline and Fish. 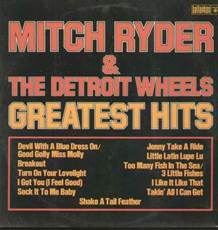 In those days I considered myself reasonably handsome and always tried to look cool for the girls.  It was a work in progress. I was developing a reputation, at least in my own mind. One afternoon, after work at the station—smelling, extra grubby and with slimy clothes—I went out to the highway and put my thumb out to hitch a ride home.  In the distance, I could see this convertible coming down the road with two—can I say this?—“chicks” in the front seat. On the one hand I was hoping they would stop to give me a lift; on the other, I wanted them to continue on, to protect this status in my mind, because I stunk. They stopped. Oh, they were good looking. I hopped in back with the biggest smile I could create based on my circumstances. They were nice enough, it was only a fifteen minute ride and I would probably never see them again. Thankfully it was a convertible. But let me emphasize: I stunk!  I was embarrassed. It was time to find a different job.

After the “stinky job,” or should I say “stinking job,” I was hired at the Singing Bridge Grocery Store and Café.  I was employed by Ecil Minard, one of the owners and my first mentor…

If there were two main principles my parents set an example for, they would be self-reliance and work.  In our family, my sister, brother and I were urged to work at a young age. In fact, we understood that it was our responsibility. My younger brother Rick worked at an A&P store in East Tawas, where the owners still praise his employment to this day. Later in life he would become an orthopedic surgeon and businessman.  Judy, my sis, was a babysitter and restaurant server in Tawas City. She became a very successful real-estate broker which allowed her to retire at an early age.