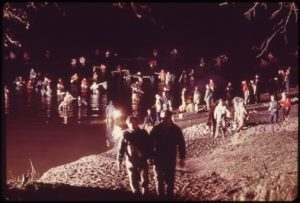 The Singing Bridge Grocery Store and Café was located about six miles south of Alabaster and named after the Singing Bridge that spanned the east branch of the Au Gres River that flowed into Lake Huron.  The bridge was named so because it sang when you traversed it in an automobile.  The place was famous.

People came from all over Michigan, Ohio and even Canada during the spring smelt run. Smelt is a small fish, generally six to ten inches in length, with a narrow body.  You catch them with hand held nets during their spawn run up the river from the lake.  The river would be packed with hundreds of people during the day and night, shoulder to shoulder, both in the river and on the banks, some half mile upstream from the mouth of Lake Huron.

During the summer the Singing Bridge store was the place tourists and cottage dwellers got a bite to eat, shopped for groceries and filled up their gas tanks with Sinclair—for both autos and boats. One side was the café and the other the grocery. They served the best fresh donuts. It was also a hangout for the state police. I wonder why. 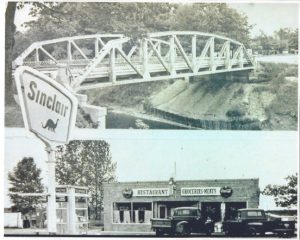 The place was owned by brothers Dar and Ecil Minard.  Combined they had eight kids.  It was a family operation.  Through the years all the children would eventually work there. Although the brothers could run either side of the business, typically Dar worked the café and Ecil worked the grocery.

Ecil hired me to work the grocery. He was the first person in my life to believe in me and my potential. He taught me how to stock shelves, compute markup, butcher meat, manage the walk-in cooler, salesmanship, display merchandise, create point of sale items, advertise, run the cash register and how to treat customers as people. Ecil showed me how to work efficiently and the importance of customer service. I became what I coined a “triple bagger.”  When a customer brought up all their groceries I could ring, bag and make change at an impressive speed so the line could keep moving.  In between, I would run outside to pump gas. I loved the job; I was always in motion and I have to say I loved Ecil.  What I learned in that period of time was extraordinary; lessons I’ve carried with me my entire life. Ecil treated me like a son. I also enjoyed the comradery of the other employees, the family members and the customers.

Mrs. V was a customer that lived in Flint, who was a middle-aged cowgirl.  She and her family had a cottage, but they also rented a farm to board her horses during the summer months. As a fifteen-year-old I was always nervous around her, because she was very pretty and friendly.  One day she came in the grocery when I was the only one in the store. She whispered that she needed a particular product. I acknowledged that we had the item and I started walking down the aisle; she followed.  I was looking left and right, up and down for the item. I stocked the shelves, so I knew where every item was located, but not that particular item. I was stalling. Now I was moving back down the only other aisle we had, with Mrs. V in tow, and I was starting to really perspire. Finally, she tapped me on the shoulder and asked, “Pete, do you know what I’m asking for?” Of course I didn’t, but I thought I was covering it up. I said, “No, Mrs. V, I don’t know that product.” She skillfully explained it was a feminine product. Really? I’m sure I was red faced and sweating profusely. 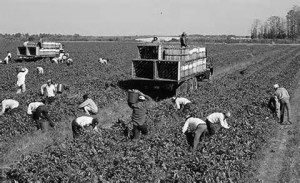 I worked with Dar’s son Terry. We had been friends for years. We ran together, including alternating driving to school.  He drove a Charger and I had a Cutlass.  When we weren’t working at the grocery store, to keep us in gas and extra spending money we would pick cucumbers at Lutz’s Pickle Farm and get paid piece work by the five gallon container.  The harder we worked, the more money we made. We were the only two white guys in the field.  We also sorted and bagged potatoes part-time at Pett’s farm just up the road.

With disbelief by some and negligible encouragement by others; impervious to their opinion, I graduated from high school at the beginning of the summer of ’68. Vietnam was in full force and was watched by Americans on their televisions, including me. I considered joining the Army right after high school, but decided to move to Saginaw, taking a job as a line inspector at Saginaw Steering Gear. Ecil Minard and his dad arranged the interview. I was now a card-carrying United Auto Worker, getting paid more money than I had ever made in my life. 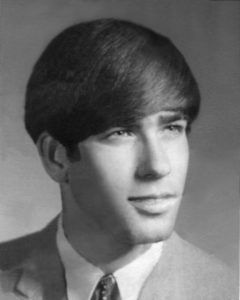 The thought of serving in the Army and volunteering to fight in Vietnam were always gnawing at me and ever present. I wanted to serve my country. While working at Saginaw Steering Gear I met a marine who had just left the service and had done duty in Vietnam. His stories intrigued and influenced me. After six months working in Saginaw I decided to go back home and enlist in the Army at a recruitment office in East Tawas. That was the beginning of my military career… 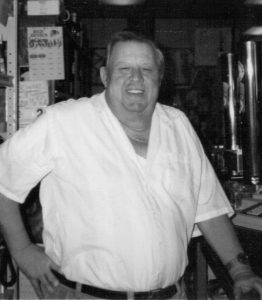 IN MEMORY: Ecil Minard died the winter of 2000. I was fortunate enough to visit him before his death. Ecil was almost bed-ridden.  With a tear in my eye, my children at my side, I hugged him and let him know how much of an impact he’d had on my life during those years and thanked him for being my mentor. Ever the mentor, smiling, eyes sparkling with pride, Ecil responded by reminiscing about how much he believed in me and the joy of being my boss.

“Thank you for reading these stories. Today, will you please forward this story on to a friend for their enjoyment too.”  – Pete