This isn’t just my story. It’s representative of the millions of other Army, Air Force, Navy, Marine and Coast Guard recruits being inducted and trained to serve our country.

…it’s early morning February 28, 1969. I’m eighteen and at the Detroit military processing center. Standing in line are recruits like me, about my age, both drafted and enlisted. We were directed to a room to take a mental test. Surely I could pass it, because, as I mentioned to you in a past story, I was probably defined in the dictionary as ‘somewhat intelligent’ because I was a polar bear who had, under his own free will, plunged into ice water during the winter. Next, we lined up for the physical exam. Seems the most important test to them, not us, was checking for a hernia. Loosen belt, drop drawers. Cough, cough.  Critical test passed.

Those that passed the tests were told to stand in a formation, raise our right hand and take the oath of enlistment.  I stood tall and proud, not unlike the day I took the Oath of Allegiance to the United States when I became a naturalized citizen at the age of eleven. “I, Peter Lemon, do solemnly swear to support and defend the Constitution of the United States against all enemies, foreign and domestic…..” 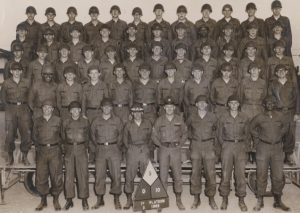 The seven hour bus ride to basic combat training at the United States Army Training Center, Fort Knox, Kentucky, as I remember, was quiet, eerie—almost ghost like. Guys were lost in their thoughts, reflecting on their family, girlfriends, friends and possibly the muscle car sitting in their driveway. I’m sure some were questioning their decision to join. Those drafted, realizing their predicament.  Were we going to measure up? Maybe that was just my musing.

Fort Knox is a huge training facility dating back to WWII. Over one million trainees had gone through the various programs since inception until I got there. They train approximately 20,000 men with 5,000 permanent military at any one time. It’s in the magnificent mountains of Kentucky.  My combat training would last eight weeks. 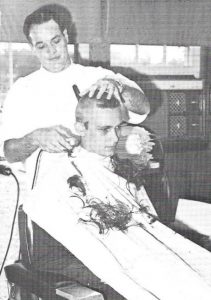 The bus had just pulled up in front of a building that greeted us with a sign that said, Welcome to the United States Army. As we departed the bus it seemed the person in charge, the DI or drill instructor, either had not read the sign that morning or didn’t understand its meaning.  Although I’d been yelled at a number of times in my life, with the volume and manner with which the DI spoke, we knew he meant serious business.

Once ordered, we chaotically scurried to line up in a formation shoulder to shoulder, front to back, and he explained the in-processing procedure.   After a brief classroom orientation, where I’m almost positive the desks were acquisitioned from the local elementary school, we lined up in front of the barber shop for the customary ‘buzz cut.’  No trimming a little here, a little there, for the long-haired hippies, college students and rednecks; unless your name was Elvis.  Buzz.  Seconds later, hair gone. Next.

As this was happening at quite the “clip,” I was observing the transition and thought there might be an opening for me to succeed in this environment. Nothing made any difference: not your ethnicity, black or white; your religion, Jew or Catholic; or your economic status, rich or poor. We would all start at the same point.

I’d been playing army since I was a kid, taken hits with real BBs, shot a rifle since I was seven, been shot in the eye with an arrow, held my own in fights and led my Alabaster militia of kids.  Yes, basic training was certainly different. In no way am I equating the two. Nor do I mean, in any way, to discredit its magnitude or decorum because I’m sure I would be tested, but I detected a feeling of tenacity and grit emerging in me as I watched.  I thought, this could be my opportunity to excel. I would give it my best. I was next. Buzzzz. 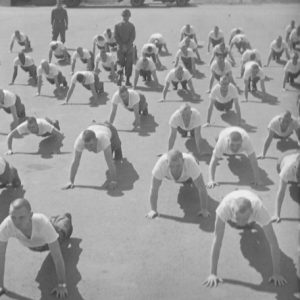 I enjoy experiences, objects, occurrences and ideas, but I don’t love them. I save that for people. Except for army basic training. I loved basic training!

Early to rise, our day was comprised of morning calisthenics which included push-ups. The DI’s favorite command was, “Get down and give me twenty.” “Fifty.” “A hundred.” Even at the age of forty-five I could still do one hundred push-ups in a minute. Next was breakfast, then more running, more push-ups, chin-ups and monkey-bars, formation and marching drills, lunch, afternoon exercises and training, then back to the chow-hall for dinner.

The food was terrific, like nothing I had experienced, and you could eat as much as you wanted in a sitting. KP or kitchen patrol duty is the act of cleaning the kitchen after cooking for and serving the recruits. Recruits never undertake KP of their own accord. Either you are ordered, because it’s your turn, or you’re ordered because you got into trouble and that was your sentence. Now, don’t be telling people this, but there were a couple of times I volunteered for KP. Sure, sure, I know it was a bone-headed idea, but I got to raid the kitchen refrigerators like a scavenger and the chocolate milk was endless. 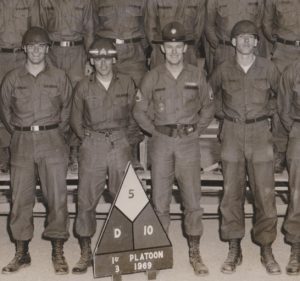 Staff Sergeant Ambrose, left of me on the far right this photo

By the second week of training, drill instructor Staff Sergeant Ambrose, of the 1st Platoon (who is to your left of me in the picture, I know, what DI smiles), chose two acting squad leaders from our platoon of fifty-five recruits to assist in leading the men.  I was selected as one of the squad leaders, in charge half the platoon. The entire first floor of the barracks was open with double bunks on both sides, and at the end was a private bedroom reserved for the squad leaders; that was my room. I took my responsibility seriously.  Not only did I want to be the best, but I also wanted my men to be the finest too.

Once we improved our physical shape and stamina, we started to expand our training program to include first aid, physical proficiency, marksmanship, hand-to-hand combat, land navigation, day and night rifle firing, hand grenades, an obstacle course and forced marches. 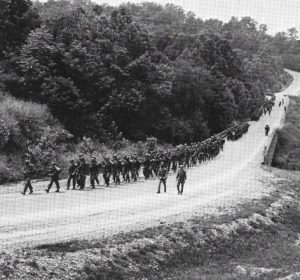 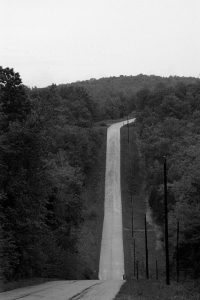 The forced marches were a test of physical and mental endurance.

The forced marches were a test of physical and mental endurance. We carried full packs, canteens, steel helmets, entrenching tools and an M-14 rifle, all of which came in at over sixty pounds.  Our goal was to march twenty miles at a mandatory pace up and over our nemeses Agony, Misery and Heartbreak. The steep incline of those hills could make a young man grimace and some, cry. I’ve provided pictures of these scorned adversaries. My squad, our platoon, 1st platoon, with streaming guidons, always led our company of two hundred and twenty seven men.

My squad—in fact, the entire platoon—competed in every aspect of training, including the confidence courses, close combat proficiency, infiltration course and the commander’s review. We were at the top of our class.

After eight weeks, it was now time for graduation.  I was proud of my experience and confident in my capabilities. We were assembled in formation wearing our dress green uniforms.  We marched in front of the commanding officer for review. Graduation was conferred on us.  Then the officers shook everyone’s hand while we were still in formation.  One of those officers approached me, shook my hand and said, “I know you didn’t get Armored as requested.   You received orders for advanced infantry; then Vietnam.  I want you to know, you will make one of the best infantry soldiers this army has ever had.” Somewhat mystified, but beaming with pride, I snapped, “Yes Sir.”

That compliment is locked in my memory. The words engrained for another day.  Every time there has been a challenge in my life, I have released that accolade in pursuit of the task at hand. 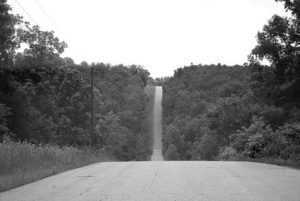 “Every time there has been a challenge in my life, I have released that accolade in pursuit of the task at hand”

I’ve always made it a point to thank people in my life that made an impact on me.  I’ve searched for years to find that officer.  If CPT Wayne France, 2LT Graham Williams or 2LT William Young is reading this story; thank you.

I’ve completed Basic Combat Training and graduated from Advanced Infantry Training at Fort Polk, Louisiana.  It’s July 24, of ’69. I gaze out an oval, somewhat hazy, window of a TWA Boeing 707. I stroke the glass a couple of times with my hand, trying to improve my visibility, straining to see – my future.  We’re headed west…

“Thank you for reading these stories. Today, will you please forward this story on to a friend for their enjoyment too.”  – Pete
We invite you to return to this website to read more of Peter’s short stories, as they are published.  To get Peter Lemon’s short stories emailed directly to your inbox – consider subscribing using the subscribe area on this web page. Subscribers will receive a story each Thursday afternoon (unsubscribe anytime).